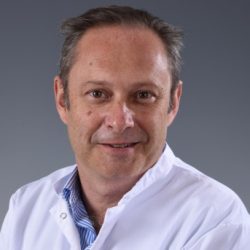 Rafael Artuch, Clinical Biochemist, Chair of the Department of Inborn Errors of Metabolism of th Clinical Biochemistry Laboratory, and Group leader of the Unit-703 from CIBERER at the Inborn Errors of Metabolism Unit, Hospital Sant Joan de Déu, Barcelona.
Rafael Artuch main domain research is in the field of inborn errors of metabolism (IEM), since he works in a laboratory Hospital, in the first-line diagnosis of these patients. Among IEM, he has focused his attention mainly in 2 fields: in genetic diseases of neurotransmission and in mitochondrial disorders (mainly in CoQ deficiency syndromes) and the research projects in this field in which he has been involved have been funded by public institutions, such as CIBERER, Instituto de Salud Carlos III-FIS and European Union.