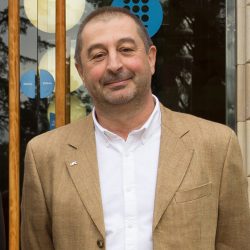 Francesc Torres (Eivissa, 1962) is a full professor with a degree in Telecommunications Engineering (1988) from the UPC’s Barcelona School of Telecommunications Engineering (ETSETB), where he teaches and does research in the field of radiocommunications and Earth observation. He started his professional career at the European Space Agency (ESA) in Holland, where he worked from 1988 to 1989. He has been head of studies at the ETSETB (1998-2000), coordinator of the MERIT Erasmus Mundus international research master’s degree (2006-2009) and director of the Department of Signal Theory and Communications (2013-2017). He received the Award for Improving Quality in University Teaching (1997) of the UPC’s Board of Trustees for the Radiation and Guided Wave Laboratory at the ETSETB.

Through the Remote Sensing Laboratory (RSLab), he has participated in more than 70 contracts funded by government bodies and industry, mainly for the development of the ESA’s Soil Moisture and Ocean Salinity (SMOS) explorer, the first satellite led by Spanish industry (EADS-CASA Espacio), which has provided data for studying the water cycle and improving climate models since 2009. He has authored more than 200 papers published in prestigious international journals and presented at international conferences, and he has received several recognitions as a member of the RSLab: the Duran Farell Prize of the Board of Trustees (2000), the City of Barcelona Prize (2001), the prize of the Catalan Association of Telecommunications Engineers (2004) and the Aeronautics Prize of Barcelona City Council (2011). He was the founding vice-chair of the SMOS Barcelona Expert Centre (2007-2010) and also had a sabbatical year as an external consultant of the GeoSTAR project at NASA’s Jet Propulsion Laboratory, Caltech, California in 2005-2006. He is a member of the UPC’s María de Maeztu Unit CommSensLab.

In the professional field, he has participated in initiatives with several professional associations. For example, he collaborated in the creation of the Catalan branch of the Official College of Telecommunications Engineers from 2000 to 2002, promoting the profession by organising the reports ‘75 proposals for the development of the information society in Catalonia’ and ‘Study of the socio-professional situation of telecommunications engineers in Catalonia, 2002’. He also participated in the organisation and moderation of several conferences organised around Catalonia in collaboration with the provincial and county councils.