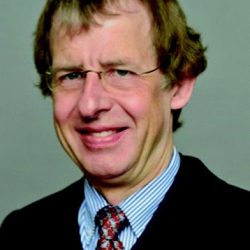 Wöll studied physics at the University of Göttingen and received his PhD in 1987 at the Max-Planck-Institut of Dynamics and Self-Organization with Prof. Peter Toennies. After a postdoctoral time (1988 to 1989) at the IBM research laboratories, San Jose, USA he accepted a position equivalent to Assistant Professor at the University of Heidelberg at the Institute of Applied Physical Chemistry.

After his habilitation he took over the chair for Physical Chemistry at the University of Bochum (until 2009). In 2000 he founded the collaborative research center SFB588 “Metal-substrate Interactions in Heterogeneous Catalysis”.

Since 2009 he is the director of the Institite of Functional Interfaces at the Karlsruhe Institute of Technology.

Elected member of the Council on Physical Chemistry of solid-State Bodies, Surfaces, and Characterization of Materials of the German Science Foundation (DFG) (2016 unti 2019).